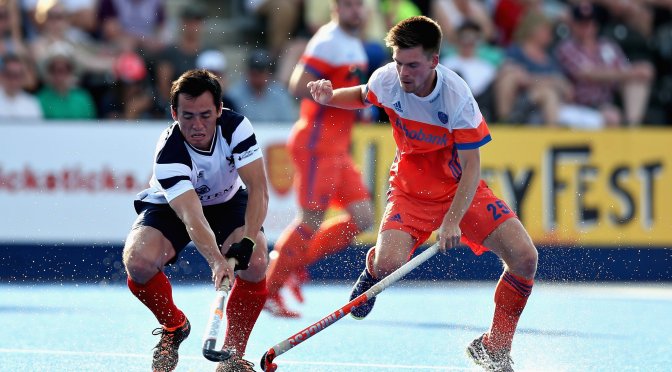 Scotland men battled hard against a top-class Netherlands side in their second match of the World League Semi-Final in London, but it was the fourth-in-the-world-ranked Dutch who came out on top with a 3-0 win.

Scotland were composed early doors and passed the ball around with confidence. The first opportunity of the match came after around five minutes; a Dutch move down the right broke into the Scots D but some good cool defending by Tim Atkins under pressure drew a foul, and gave Scotland the opportunity to build from the back.

The first penalty corner of the match was awarded to Scotland. Kenny Bain injected for Willie Marshall, who sent a low flick goal ward but it evaded the sticks of the diving Nick Parkes and Bain for an easy save.

Then it was a “heart in mouth” moment when the Dutch were awarded a penalty corner. It came after a good save by Tommy Alexander found a Scots foot. The goalkeeper, who has been on top form so far in the tournament, produced another top save from the penalty corner and batted the ball clear with his left pad.

Scotland surged forward with positivity and Lee Morton drove into the Dutch D, but was crowded out by Dutch defenders.

Then some superb defending by Callum Duke put a Dutch attack down the left to an end inside the Scotland D. He looked strong, quick, and in control as the threat emerged on the flank.

Then all of a sudden, one lapse of concentration was punished by the top-class opposition. A lovely touch at the top of the D by Glenn Schuurman set up Robbert Kemperman to score for the Netherlands just before end of the first quarter.

Early in the second quarter there was a notable increase in pressure from the Dutch – a high press made the Scots work hard at the back.

The Netherlands then won a penalty corner off the foot of Marshall and the ominous sign of drag flick expert Mink Van Der Weerden at the top of the D screamed danger. But Alexander met the drag flick with a tremendous reaction save to keep the score at 1-0.

Then came a piece of sublime hockey by the Dutch to open Scotland up on the left of the D, but the final effort was scooped high over the bar by Jonas De Geus.

Scotland came agonisingly close to an equaliser with a minute of the half remaining. Some great play by Bain on the right had him fire the ball across the keeper but Wei Adams couldn’t get a touch to surely bag an equaliser.

Into the second half and an error in defence allowed the Dutch to break into the Scots D, a penalty corner was then conceded by Russell Anderson. Van Der Weerden stepped up again but this time he slipped it low and wide of the goal. Scotland escaped again.

Just moments later and Scotland conceded another penalty corner after an attacker’s legs were hooked by Gavin Byers. This time the deadly Van Der Weerden picked his spot in the right corner of the net to make it 2-0. Alexander in goal for the Blue Sticks had absolutely no chance.

Scotland were not going to go away without a fight. A lovely turn by Byers allowed him to surge forward towards the Dutch D but his pass for Bain was well cut out.

Then another delightful piece of play by Scotland opened the Dutch up, the ball was sent to the far post for Bain who dove in to finish, but the ball was touched away from him to deny the goal.

Then came the best chance of the match, a brilliant break by the Scots had Bain send Alan Forsyth through on goal but the striker couldn’t find the finish with the ball bobbling.

The Netherlands then made it 3-0 with ten minutes remaining. A slick move into the Scots D had Robbert Kemperman pick out Valantin Verga in front of goal to finish under pressure from Parkes.

Scotland Head Coach Derek Forsyth said, “We started well and played some good hockey but the Dutch are a top team. It would have been nice to have scored but to be fair they showed everyone how to play hockey today. I don’t think we’ve been at our best yet in this tournament, so we’ll be looking to improve again in our next game.

“We’ve got two more games in the pool, Pakistan is next so we’ll prepare well for that and give Pakistan a good game.”