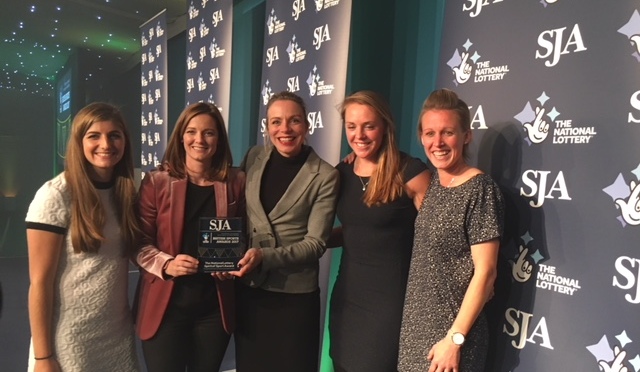 England and Great Britain hockey players past and present were in the limelight at the annual Sports Journalist’s Association (SJA) British Sports Awards held at the Tower of London on Wednesday 6 December.

And it was clear from the attention the players in the room – Sarah Haycroft and Giselle Ansley – received that next year’s Vitality Hockey Women’s World Cup is already starting to create a buzz among the British sports media. The two players, who recently returned from the Sentinel Homes Hockey World League Finals in New Zealand, were interviewed by a number of news outlets with all the questions focussed on next year’s big event.

It was a year ago that the Great Britain team, represented by Alex Danson, Shona McAllin and Nicola White, collected the SJA Team of the Year Award. With bronze medals at the Hockey World League Semi-Finals and the EuroHockey Championships for the men and women’s teams, there would be no repeat of that award this year, instead it was the turn of two former stars of the team to steal the show.
“Candid, brave, bold and proud,” was Jan Paterson’s description of Kate and Helen Richardson-Walsh as they received the National Lottery Spirit of Sport Award. The chief executive of the British Olympic Foundation and director of Olympic Relations at the British Olympic Association, continued to describe the Richardson-Walsh’s as two women who have become inspirational figures, not just through their sporting achievements but also through their determination to stand up and talk openly about same sex relationships and mental health.
Collecting the award, which is given to people who have made outstanding contributions to sport on and off the field, Helen Richardson-Walsh  highlighted the impact and importance of National Lottery funding, saying: “If it wasn’t for the National Lottery, we would not be stood here today as gold medallists – I don’t believe so. We are true National Lottery babies, we got into the squad in 1999 and we have really benefited from that for the 17 years that we were elite hockey players.” 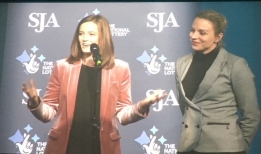 Kate Richardson-Walsh added that the reception the entire gold-medal winning team has received since they returned to the UK with gold medals has been incredible. “We did it as a team and I think that is what everyone picked up on – that squad of 31 women and the incredible staff.” “We all take the job of being role models very seriously and I know that the team going forward are doing exactly that.”
Talking about gender and sexuality in sport, she added: “We feel very fortunate to have grown up in a sport where we feel comfortable in our own skin and we feel supported by our team mates and our families but we also know that not every one is as lucky as we are. We feel every should have the ability to feel comfortable in their own skin and be the best versions of themselves that they can and achieve what they want to achieve.”
Ansley and Haycroft were among the many elite sports people who were also attending the awards. The Surbiton, England and Great Britain pair spoke to roving reporter Faye Caruthers about the impact a vociferous and supportive crowd would have upon the team at next year’s Vitality Hockey Women’s World Cup.
“We heard Gordon Banks speak earlier about how special it is to play in your home country in a World Cup,” said Haycroft. “And that is going to be so true when the World Cup comes to London on the Olympic Park next year.”
“I know it is a cliche,” added Ansley, “But a home crowd really is your twelfth player.”
And to prove just how committed the international players are when it comes to supporting each other, Alex Danson made a mad dash across the capital from a previous engagement to arrive just in time to see her two former team mates receive their award. “They have changed the landscape of British sport,” was the current captain’s verdict on Kate and Helen Richardson-Walsh’s impact on hockey and the wider sporting environment.
“These two don’t just inspire the future, they inspire those of us playing today to be as Kate said, ’the best version of ourselves’”, added Ansley.
Other winners at the Sports Journalist’s Association British Sports Awards included Hannah Cockroft who won Sports Woman of the Year – the first Paralympic athlete to do so; Chris Frome, who won Sports Man of the Year; and the England Women’s Cricket Team, who picked up the award for Team of the Year. A full list of award winners can be seen at www.sportsjournalists.co.uk