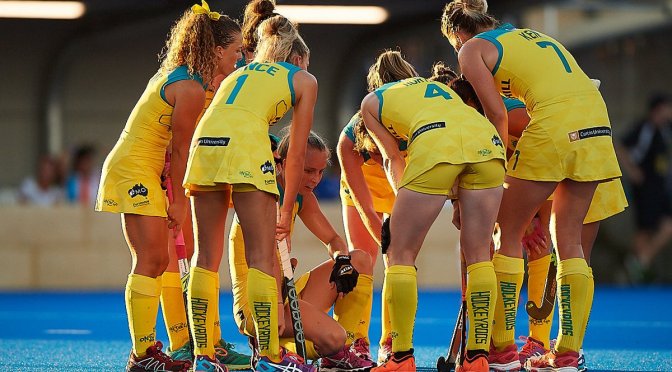 Saturday 10 February | The Hockeyroos have sealed an impressive Test Series victory over China PR with a hard-fought but exciting 4-2 win on Saturday night at Guildford Grammar Turf.

The sides were locked at 1-1 at the final change before a frantic four-goal last quarter where Gabi Nance thundered Australia ahead only for Gu to level for China from a penalty corner two minutes later.

The Hockeyroos wouldn’t be denied despite the setback, with Stephanie Kershaw and Savannah Fitzpatrick hitting back to secure the victory.

The result means Australia claims the series with three wins, one draw and one loss over the past week, in a positive sign ahead of the 2018 Commonwealth Games in April.

Australia levelled with barely two seconds left on the clock in the first quarter, when Ashlea Fey drove a speculative ball into the D, with Madi Ratcliffe diverting it past China keeper Ye Jiao.

China mounted the pressure in the second quarter but were repeatedly thwarted by Lynch who made a string of fine saves.

Lynch first denied Gu from a 24th minute drag flick, before a brilliant save with her pads when China countered with Song in on goal one-on-one.

The Warrandyte product was also forced into a double save from shots from Zhong and Zhang, before another block from a high Gu drag flick with her outstretched arm.

Australia rallied in the third quarter, but chances were few and far between, before an explosive final quarter.

Nance put the Hockeyroos ahead in the 57th minute with a wonderful reverse stick strike which cannoned in off the crossbar.

Australia responded immediately, with Kershaw firing an angled drive into the backboard to make it 3-2.

Fitzpatrick gave Australia breathing space at the end, netting the fourth with a cool finish past Ye Jiao.

Australia’s next competitive matches will take place in the lead-up to the Commonwealth Games on the Gold Coast from April 4-15.