Surbiton Men extended their lead at the top of the Men’s Hockey League Premier Division to seven points, having played a game more than nearest rivals Beeston. Beeston lost 2-1 at Wimbledon on Saturday afternoon, paving the way for Surbiton to cement their position at the top of the table. 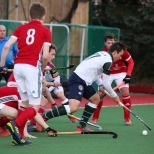 With Surbiton due to head to Switzerland next weekend to play European indoor hockey, they needed all three points against a Canterbury side battling with Kent rivals Sevenoaks against relegation. At half time, Surbiton had a slender 1-0 lead, Alan Forsyth having opened the scoring following Sam Spencer’s run down the left wing and excellent interplay in the circle.

During the half time interval, whilst the players were off the pitch, a massive hailstorm turned Sugden Road’s water-based pitch from green to white. After experimenting with a tractor and trying to scrape the ice with a pipe, the spectators were welcomed onto the pitch to try and accelerate the thawing process.

Thanks to their efforts and allowing for sufficient warm-up time, the second half started at 3.30 pm after a gap of approximately fifty minutes.

Surbiton were clinical, scoring six goals in the second period of thirty-five minutes. David Goodfield doubled Surbiton’s lead from open play, although there were brief concerns about Arjan Drayton Chana, who fell to the ground during the attack.

Forsyth scored his second goal with a shot from the left of the circle which nestled in the far right corner netting just above the board. The Forsyth-Goodfield sequence continued when Goodfield scored with reverse stick shot to put Surbiton in command with a 4-0 lead.

Forsyth then completed his hat-trick from Surbiton’s fourth penalty corner of the match, even though the injection was initially mistrapped.

Surbiton captain, Chris Grassick had the last word with a quickfire double. His first goal saw the ball trickle over the goal-line, but the second was a superb finish from the centre of the circle to complete a convincing 7-0 victory.

Sevenoaks lost 6-0 at Reading on Saturday night, with East Grinstead winning 3-2 at Holcombe. On Sunday, Hampstead & Westminster came away from Brooklands Manchester University with a 5-3 victory.

Surbiton return to outdoor hockey on 24 February when they make the relatively short trip to Reading for a 6.30 pm push back.