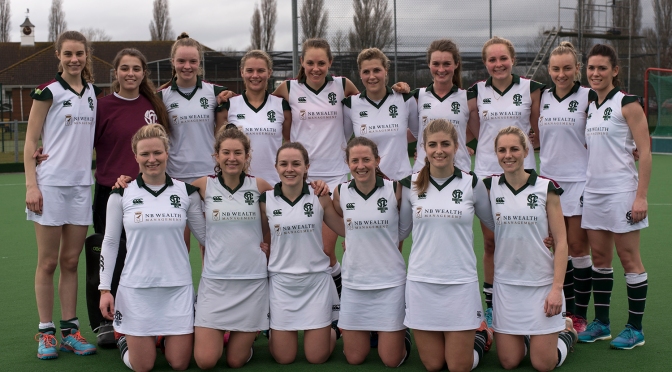 Surbiton Ladies became the first team to qualify for the end of season IWHL Championships after thrashing Slough 8-1 to achieve their biggest ever national league victory away from Sugden Road on Saturday lunchtime. Slough suffered their biggest top flight home defeat at Upton Court Road since Surbiton won 6-1 in March 2013, but bounced back on Sunday afternoon to win 2-1 at Leicester and ease their relegation fears.

Surbiton also bounced back after suffering a 2-1 home defeat to Holcombe the previous week and only needed two minutes to take the lead, Emily Defroand scoring from open play.

Six minutes later, an attacking run from Hannah Martin set up Surbiton’s second goal, Beckie Middleton finishing in fine style to put the Slough defence under pressure. Slough’s woes continued in the 20th minute when Giselle Ansley slotted her fourth penalty stroke of the season past home goalkeeper, Asha Tranquille-Day and then nine minutes later, Ansley found the backboard with a penalty corner drag-flick to leave Slough facing a 4-0 half time deficit.

Surbiton were clinical and under darkening skies and the floodlights, Middleton scored her second goal of the game in the 41st minute following support play from Anabel Herzsprung to give the visitors a five goal advantage.

To their credit, Slough never gave up in spite of Surbiton’s dominant position and pulled a goal back in the 51st minute, Georgina Bathurst’s shot finding its way across the goal-line to score what was to prove to be a consolation goal.

Within a minute of Bathurst’s strike, Middleton completed her hat-trick to extend Surbiton’s lead to 6-1, and four minutes later Ansley followed in her wake with another penalty corner conversion for her ninth league goal of the season, one behind the division’s leading goalscorer, Erica Sanders, who scored her tenth goal in the University of Birmingham’s 4-2 defeat at Canterbury.

With nine minutes remaining, Martin converted Surbiton’s sixth penalty corner of the game, putting away a rebound from the left of the circle after Tranquille-Day saved Ansley’s drag-flick.

Trailing 8-1, Slough had more possession in the Surbiton half in the closing minutes, but the damage had been done and Surbiton cruised to a much needed victory after the previous week’s setback.

Slough travelled to Leicester Grammar School to fulfil the fixture originally postponed due to Slough’s European indoor commitments and postponed for a second time due to the winter weather. At the third attempt, Slough prevailed 2-1 after Katie Long gave Leicester a fourth minute lead. First half goals from Dilly Newton (11 mins) and Lizzy Totten (34 mins) lifted Slough up to eighth, level on points with Canterbury. Clifton Robinsons dropped to ninth, one point behind Slough but three points ahead of Leicester. Clifton travel to Leicester next Sunday (18 March).

Surbiton face a crunch match of their own next Saturday (17 March) when second placed East Grinstead, three points behind Surbiton with a game in hand, visit Sugden Road. Holcombe dropped to third after they could only draw 1-1 at home to Leicester on Saturday and the University of Birmingham stayed fourth after their defeat at Canterbury. With Buckingham six points adrift of fourth place with three games to play, it is likely that East Grinstead, Holcombe and the University of Birmingham will all join Surbiton at Lee Valley at the end of April.

The four Premier Division matches postponed on 3 March have all been rescheduled for 18 March, so next weekend could see the playoff and relegation picture become much clearer. 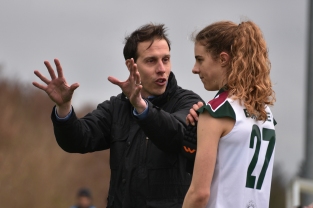 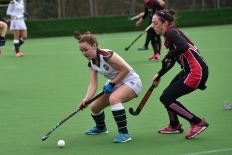 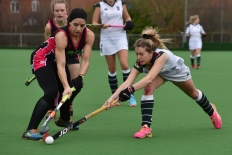