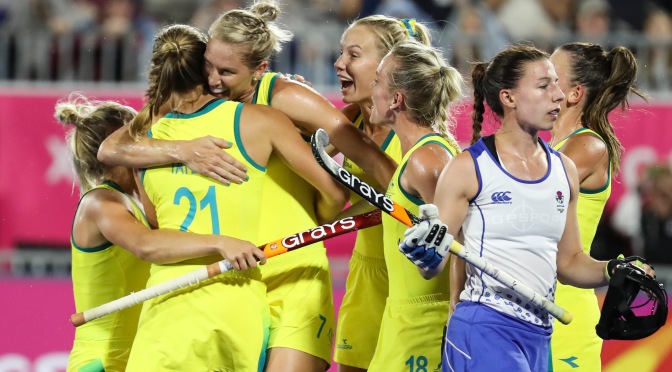 Gold Coast, Australia: The women’s hockey Semi-Finals are set for the Gold Coast 2018 Commonwealth Games, with England taking on New Zealand and Australia playing India for a place in the gold medal match.

The Semi-Final line-up was confirmed following India’s 1-0 victory against South Africa and Australia’s 2-0 win against Scotland at the Gold Coast Hockey Centre this evening.

India guaranteed their spot in the medal games as they battled their way to a 1-0 victory over South Africa.

Whilst both teams had chances through open play and penalty corners, it wasn’t until the fourth quarter that India made the breakthrough.

From the left wing, Navneet Kaur passed the ball in-field to Vandana Katariya who in turn played the ball forward towards the centre of the circle. There, skipper Rani received and found enough space to turn and shoot, leaving the South African goalkeeper wrong-footed.

South Africa fought until the end but could not find a way through the Indian defence which remained structured and disciplined throughout this match.

After their win, Chief Coach Harendra Singh praised his players for qualifying for the Semi-Finals. He said: “It was a difficult moment for us when we lost our first match against Wales, but the girls did not lose their composure and focus. They stuck together and took responsibility to perform for their nation which proved to be the key to their success in the last three matches. It was a tough match today against a strong team but the girls made the right choices and I am extremely proud of their performance.” 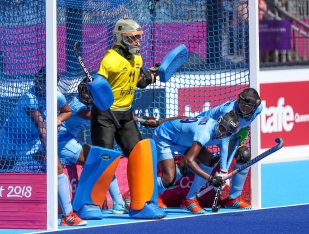 Australia had the better of the early chances with skipper Emily Smith going close after five minutes, before the first penalty corner was awarded in the 11th minute.

The defending champions then doubled their lead in the 41st minute. A counter-attack saw Savannah Fitzpatrick play a neat ball inside for Grace Stewart who smashed the ball under the Scottish goalkeeper and into the goal.

Scotland had their chances throughout and earned a number of penalty corners in the last quarter but could not find a way past a resolute Hockeyroos defence.

Looking ahead to the Semi-Final, Australia’s Emily Smith said: “India are a very structured team and their basic skills are world-class. We’re going to have to have our smart hockey brains on to get around them and create chances. If we play the way we did against New Zealand we will be able to do that.”

Following today’s results and confirmation of the top two standings in each of the Pools, the women’s Semi-Finals will see England take on New Zealand and Australia play India on the evening of Thursday 12 April 2018.

Matches in both the women’s and men’s hockey events at the Gold Coast 2018 Commonwealth Games will be taking place until 14 April. For the full event schedule, click here.

The women’s hockey event at the Gold Coast 2018 Commonwealth Games is one of the last major international events before the Vitality Hockey Women’s World Cup London 2018 taking place in England between 21 July and 5 August. Tickets for that event are still available and can be purchased here.