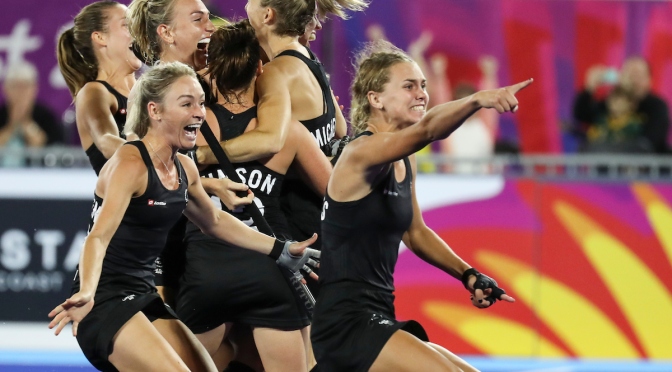 GOLD COAST – New Zealand booked a gold-medal clash with Australia after scoring a thrilling shootout victory over England in their semifinal at the Gold Coast Hockey Centre on Thursday 12 April.

Scores were locked at 0-0 at full-time, before the penalty heroics of captain Stacey MICHELSEN (NZL) and back-up goalkeeper Grace O’HANLON (NZL) guided the Black Sticks to victory.

The second semifinal between Australia and India was also a low-scoring affair, with both sides struggling to break the deadlock.

It took a moment of brilliance from Grace STEWART (AUS) to give her side the lead, as she pounced on an errant pass into the attacking circle to slam home the game’s only goal.

India took its goalkeeper off the field (allowing it to play with 11 outfield players) with four minutes remaining in the second half as it pushed for an equaliser.

But the stoic defence of the Hockeyroos was up to the task, holding strong after some fantastic saves from seasoned goalkeeper Rachael LYNCH (AUS).

In the day’s other games, Scotland produced its finest performance of GC2018 to defeat Malaysia 6-2 and finish in seventh place. Malaysia finish eighth.

And it took a shootout to separate Wales and Ghana, with the Welsh women finishing on a winning note and securing ninth position. Commonwealth Games debutant Ghana finish in 10th place.

For a complete wrap of all the day’s results click here.