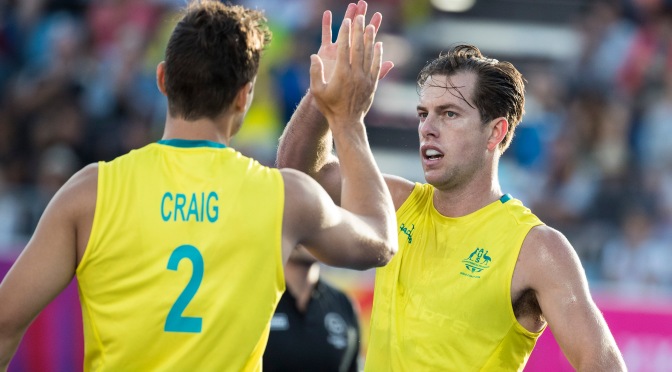 Thursday 12 April 2018 | Murwillumbah product Dylan Wotherspoon says chasing gold on the Gold Coast is really special with family and friends right behind him.

Wotherspoon, who turned 25 earlier this week, could enjoy a big celebration over the weekend with the Kookaburras to play England in the 2018 Commonwealth Games semi-finals at 9:45pm AEST on Friday night.

Australia will be chasing a spot in the gold medal match against either India or New Zealand to be played at 9:15pm AEST on Saturday evening.

The Commonwealth Games are special for all players but for Wotherspoon, playing on home turf makes it extra special.

“It is really special,” said Wotherspoon, who has scored three goals during the 2018 Commonwealth Games.

“It’s something for me, so close to home, it’s a great chance to give back to family and friends.

“It’s really special. To play for you country so close to home is amazing.

“There’s a lot of supporters here for me.”

The forward added that Australia were chasing a more-complete performance in the semi-finals.

“We’ve come out of the blocks firing nearly every game,” he said.

“At the moment we’re focusing on the 60-minute performance. We’re not quite happy with the way we’ve been performing.

“We’ll look at the footage and hopefully keep building and building for the two games to go.”

“We know that if we do put that 60-minute performance it’s going to be very tough for someone to beat us,” Whetton said.

“We play our best hockey in pressure situations and that’s a semi-final tomorrow night.

“We’re looking to put in a solid performance tomorrow night and to be in that final.”

Whetton, who is part of the Kookaburras’ leadership group, added that they weren’t feeling any extra pressure.

“Not at all. We’ve started this tournament off fresh,” he said.

“Like any tournament, we go out there to win that tournament.

“We don’t feel any pressure to go out there and perform for anyone except ourselves.

“We know if we play our best hockey, we’ll come away with a good result.”

Australia plays England in the semi-final from 9:45pm AEST on Friday.

The Kookaburras defeated England twice in last month’s Sultan Azlan Shah Cup including the final but drew with them at the World League Final in India in December.