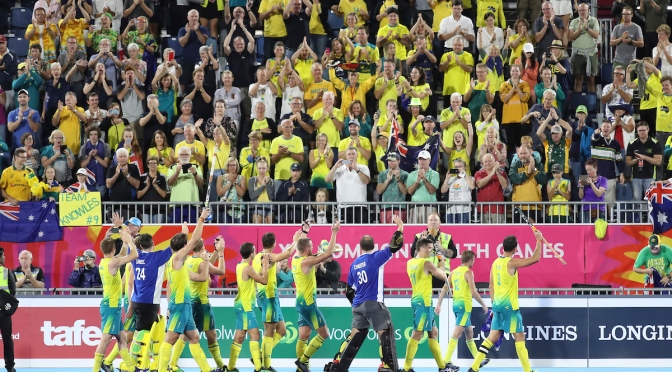 Australia’s win was the perfect end to captain Mark Knowles career. Prior to this event the legendary Kookaburra announced he would retire after Gold Coast 2018 and his team mates ensured he got the perfect send off.

Aaron Kleinschmidt jabbed home a pass just in front of New Zealand goalkeeper Richard Joyce in the 20th minute to set Australia on their way.

The Kookaburras then doubled their lead at a crucial time when Matt Dawson smashed home a penalty corner into the bottom right of New Zealand’s goal two minutes before half-time.

New Zealand’s Hugo Inglis had an opportunity in the 42nd minute to get his team back in the game but missed, whilst Dylan Wotherspoon, Lachlan Sharp and Trent Mitton all had chances to put the hosts further ahead.

It could have been a fairy-tale end for retiring captain Mark Knowles as Australia were awarded a penalty stroke in the 54th minute. However it wasn’t to be as the Aussie captain flicked high over the bar.

That didn’t detract from an excellent performance by the world’s number one team who made history by winning the Commonwealth Games men’s hockey for a record sixth time.

Speaking afterwards, Australia captain Mark Knowles said: “It was a beautiful night, I couldn’t have scripted it. The boys did so well and I am so proud. I looked up at the clock a couple of times after the stroke and thought the boys were going to back me up this time and they did. That’s what every leader wants to see, their team perform and act like that under pressure in front of an amazing crowd.”

England’s men followed up their women’s bronze medal win earlier in the day as they also defeated Asian champions India.

Sam Ward proved England’s superstar as he scored both goals to take him to the top of the event’s scoring charts with nine goals and retain the bronze medals that England won in Glasgow four years ago.

Ward scored from two penalty corners, his first coming in the seventh minute.

India did not make it easy for England however and drew level in the 27th minute, with Varun Kumar scoring just before half-time from a penalty corner.

England edged possession in this game and were rewarded in the 42nd minute as Ward pounced on a penalty corner rebound to score what proved to be the winning goal and earn his team the bronze medals.

Speaking afterwards, England captain George Pinner said: “It’s elation, but a lot of relief. We wanted to be in the final desperately. We were devastated last night, but today we have been focused on the process. All we wanted was a medal. It wasn’t our best and we know that.”

The men’s hockey event at the Gold Coast 2018 Commonwealth Games is one of the last major international events before the Odisha Hockey Men’s World Cup Bhubaneswar 2018 taking place in India between 28 November and 16 December. For more information about that event, click here.