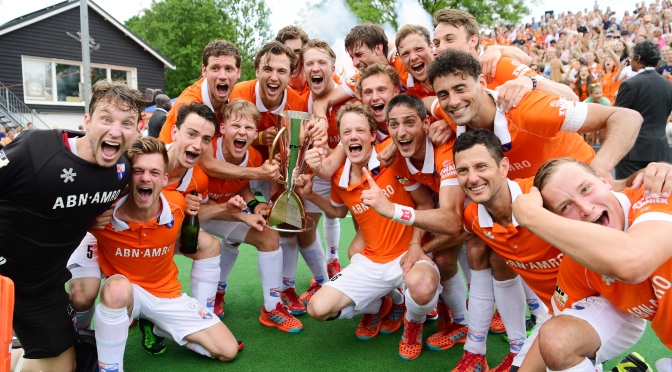 HC Bloemendaal won their third EHL crown as they won an epic battle with SV Kampong in the final, taking back the Alain Danet Trophy they win 2009 and 2013 while HC Rotterdam took the BRONZE medal.

It was much to the delight of the bouyant home crowd with a largely orange fan-base packing the sold out stands in Noord Holland.

Bloemendaal made most of the early moves in the first half with David Harte standing tall to make two calm saves with his hands. Bloemendaal has the ball in the goal via Jord Beekmans but it hit his foot before he got the final scrambled touch.

Roel Bovendeert crashed a reverse-stick shot wide of the goal but Kampong rode out that early storm as Sander de Wijn began to pick off more and more ball. Jip Janssen crashed a ball just out of reach of Robbert Kemperman to serve as a warning shot.

And they took the lead in controversial fashion when Kemperman took a long  corner, first moving the ball left before returning to the right where he slapped into the circle. Bloemendaal stood still, expecting the ball to have been judged not to have moved five metres.

But Constantijn Jonker was alive to the chance and was in position to tap home. That came 10 seconds before half-time and ensured a 2-0 half-time lead.

Bloemendaal turned things around in the third quarter, however, with two goals in three minutes. It came from a corner which was allowed go beyond the five-metre line, allowing them to go for two-goals, he worked a one-two with Jamie Dwyer and Spaniard unleashed a rocket of a shot into the roof of the goal for 2-2.

Three minutes later, a monster aerial out of defence from Floris Wortleboers fell invitingly for Roel Bovendeert in behind the last defender and he cushioned the ball with lovely soft hands to beat David Harte.

Kampong almost reduced the deficit from a Janssen drag-flick but it was gloved off the line by the post man. Bloemendaal had three major chances to seal the deal from there on as Florian Fuchs twice got through one on one only to be denied by Harte. Dwyer also nudged another chance wide before the killer moment came in the 58th minute.

Kampong withdrew their goalkeeper and were almost instantly caught with de Wijn up the pitch, claiming a free. The umpires waved play on as everybody stopped, giving Thierry Brinkman the chance to burst up the pitch and slot home on his reverse into the empty net for 6-2.

Quirijn Caspers hit the post with a shot in the endgame before Jamie Dwyer crowned the victory in the final 11 seconds.

Man of the match Xavi Lleonart said afterwards: “I don’t have words; it was always my dream but now I can say I am an EHL winner!

“Bloemendaal is the best club in the world, the atmosphere is incredible. I want to thank all the Bloemigans, the volunteers and everyone. It was an amazing event and now we have the title.”

For goalkeeper Jaap Stockmann, it was the perfect way to end his career as he retires: “To finish off on my home ground in such an atmosphere, winning a tournament cannot be better!

“For the team, it was fantastic to see after the great disappointment in the playoffs to get back into it, reshape and put on this kind of performance. I think we were unstoppable!”

Earlier, Rottterdam snatched a last-ditch victory in the BRONZE MEDAL match as they won a dramatic battle with Herakles 5-4, a game that swung back and forward at every stage.

They trailed for long periods to a Toni Sanz del Campo field goal in the third minute but got back level via Tjep Hoedemakers in the third quarter.

Jeroen Hertzberger’s penalty corner put them in front but another Sanz del Campo strike late in the game gave Herakles hope of a famous result at 4-3. But Thijs van Dam spun on a brilliant shot to make it 5-4 and send the medal just down the road to Rotterdam.

Reflecting on a thrilling game, Seve van Ass said afterwards: “We did pretty well. Yesterday was tough for us but we played a solid game and they fought like lions so it was a really good contest. I think we deserved the win in the end but, one minute to go to get the final goal, it’s nice and it was a very exciting game.