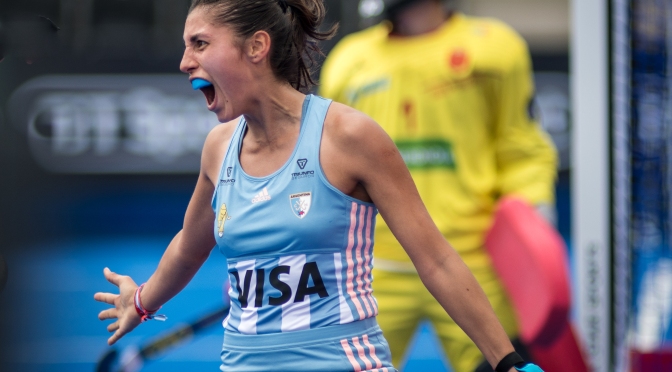 An upset looked to be on the cards in Pool C when Spain (WR:11) took an early lead against the 2014 World Cup bronze medallists Argentina (WR:3). Carola Salvatella was on hand to bat the ball from mid-air past Belen Succi in the

Argentina goal and for a few minutes there was an eerie hush among the Argentina fans in the hockey arena.

Argentina’s response however was swift as, five minutes later, Noel Barriounuevo swept in a penalty corner for Julieta Jankunas to deflect past Maria Ruiz.

If the equaliser was timely, the next Las Leonas goal was nothing short of brilliant. Maria Ortiz picked up the ball on the left-hand side of the Spanish circle and unleashed a shot that was perfectly placed just under the crossbar. Six games in and the Day 2 hockey spectators might have witnessed the goal of the tournament.

The third goal was a measure of Argentina’s tenacity when they are at their attacking best. The initial shot was blocked by Ruiz but Delfina Merino, who had first played the ball into the circle had continued her run and slipped the rebound to Agustina Albertarrio who had an empty goal to fill.

Spain huddled and attempted to re-group but this was Las Leonas at their consummate best. Merino ran the ball into the circle and her pass to Ortiz was perfect. The striker hit the ball first time and squeezed it through the gap between post and ‘keeper to take the score going into half-time 4-1.

It was captain Merino herself who benefited from the next attack. A goalmouth scramble saw the ball partially covered by Ruiz and, as the ‘keeper desperately tried to clear, Merino prodded the ball over the line.

The final quarter saw Argentina hit their sixth as Noel Barriounuevo stepped up to fire home a penalty stroke after an infringement in the circle. With the game effectively wrapped up, Argentina let their concentration slip momentarily and Spain were able to force a penalty corner. An innovative routine allowed Beatriz Perez to sweep the ball home and restore some pride for the Red Sticks.

For Spain’s Head Coach Adrian Lock this was an outcome that will not impact Spain’s game plan. “We always knew this would be tough,” he said. “Argentina are number three in the world and we haven’t played them for ten years. In so many ways it was a good game to play first because now we can reflect on today, learn from the things that didn’t work and be ready for the other two pool games. We competed today, it was just a few mistakes that let us down.”

Agustina Albertarrio of Argentina said that Spain’s opening goal in the third minute spurred her team on. “We came into a huddle and we said, ‘Come on guys, look there are 57 minutes left, let’s get out and play our game’.” 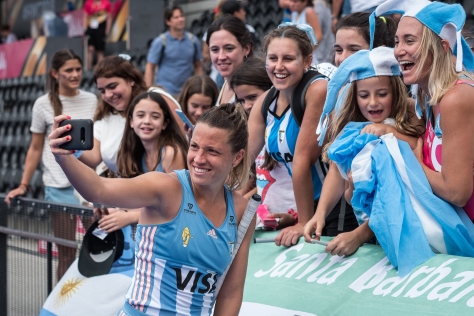