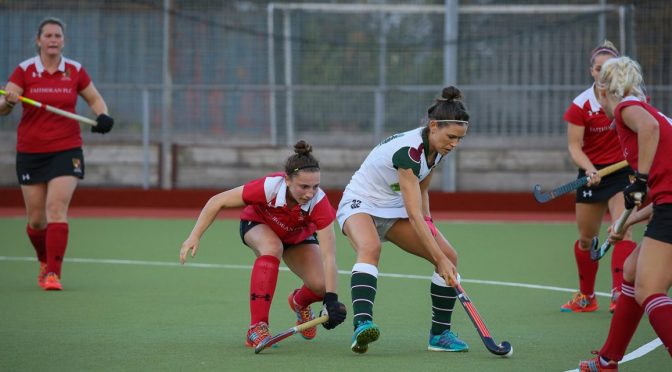 Surbiton’s lead at the top of the Investec Women’s Hockey League Premier Division was cut in half from six to three points after Holcombe inflicted the reigning champions’ first league defeat of the season at Holcombe Park.

Before the game, both teams and umpires paid their respects in advance of Remembrance Sunday, lining up either side of the halfway line.  Initially Surbiton dominated possession, forcing two penalty corners in the first six minutes, only to struggle with trapping both injections. Once Holcombe managed to get out of their own half, Steph Elliott ran toward goal before shooting high and wide and Philippa Lewis also threatened.

Surbiton captain, Georgie Twigg blazed the ball over the bar and Hannah Denison, making her league debut alongside youngster Alice Klugman and Welsh international, Emily Rowlands, went close, shooting past the left post. Elliott’s effort to play a long pass to Hattie Jones ended up over Surbiton’s backline. Leigh Maasdorp and Emma Trunks were firm at the back and Elliott, Trunks and Jo Westwood played the ball across the pitch while working out the best tactic for attacking the Surbiton defence.

Emily Defroand had a late chance before half time to give Surbiton the lead and Klugman was eager in the Holcombe circle but the teams turned round with the scoreline still blank.

At the start of the second half after Laura Myers replaced Rose Thomas in the Holcombe goal, Emily Atkinson battled with Holcombe’s Sofia Viarengo Cervino and Susie Catlin shot wide. Both teams had their chances in the second half, but the deadlock was finally broken with eight minutes to play, Viarengo Cervino running at the Surbiton defence and then finding Candice Manuel on the right of the circle to beat Surbiton goalkeeper Grace O’Hanlon and leave Surbiton on the precipice of defeat.

Holcombe virtually sealed the win by running down the clock and then forcing a last minute penalty corner before the whistle confirmed the end of Surbiton’s unbeaten run this season. Surbiton’s only real consolation was the form of youngster Ella Burnley, showing maturity beyond her years.

Buckingham moved above East Grinstead into third with a 1-0 home win over Slough whilst East Grinstead lost 1-0 at Bowdon Hightown.  Beeston consolidated their fifth place with a 3-1 win at Canterbury to stay two points ahead of Clifton Robinsons, 4-2 winners at home to the University of Birmingham.