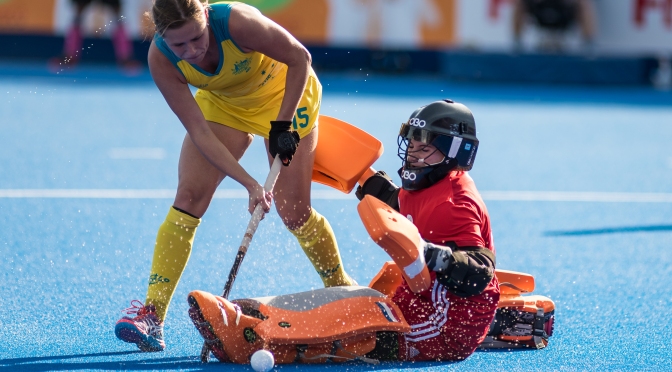 The Netherlands (FIH Hero World Ranking: 1) have moved to the top of the table as they took control of their encounter with Australia (WR:3). After a slow start, by their standards, to the competition, this was a better performance by the 2018 World Cup winners. Australia, by contrast, were not as sharp as they had been in their previous two matches at the Wanglibao Hockey Champions Trophy Changzhou Wujin. They remain in second place in the competition.

Argentina are on zero points after the shock result of the day saw China (WR:11) beat Las Leonas (WR:4) by a 2-0 score-line. The result puts China on five points, one point behind Australia.

Japan will be delighted to have held the world number two side Great Britain to a 2-2 draw. Japan currently have one point, while Great Britain have two points to their credit.

Australia had started the competition so brightly that this match had all the makings of a really combative and thrilling encounter. Unfortunately for the Hockeyroos this was the day they failed to ignite as a team and as the Netherlands took a firm grip on the game, the team in gold and green saw their belief slipping away.

The world number one side, the Netherlands, themselves have not been at their sumptuous best in the early stages of the tournament but, as Xan de Waard said: “Today was our best performance of the competition so far and we made a lot of space for ourselves.

“Also, we are a new team and so it is taking time for everyone to get to know each other. That is beginning to happen now.”

One of the stars to emerge from the new look Dutch team is teenage sensation Marijn Veen and it was the 19-year-old who scored the opening goal. The ball was played round the back and slipped into the melee of players. Two attempts on goal were kept out by the ever-agile Rachael Lynch but Veen was on hand to slap home as the ball bounced loose.

Until that moment, the pressure had been equally distributed. Both sides were playing some nice balls across and around the pitch but there were also some unnecessary risks being taken and a lot of turned over possession. With the goal, Dutch nerves seemed to settle and suddenly Australia were left chasing shadows and playing hopeful passes that were easily intercepted.

The second Dutch goal came from the reliable stick of Caia van Maasakker. A penalty stroke was awarded for an infringement in the circle and van Maasakker stepped up to score her third of the competition.

Jodie Kenny had a chance to reduce the deficit but her penalty stroke flew past the outside of Josine Koning’s goal.

The third Dutch goal was a thing of beauty. Ginella Zerbo drove the ball along the baseline and slipped it to Maria Verschoor. She in turn put it back into Zerbo’s path and from a narrow angle she shot home.

“We had a bad day today and you can’t afford to do that against the number one side,” said Paul Gaudoin, Head Coach to Australia. “We saw the chinks in the Netherlands’ armour at the World Cup in London, and if we make the final, we will be looking to exploit that.”
Argentina v China 0-2 (0-2)

A first win for the host nation had the crowd cheering rapturously as China (WR:11) beat Argentina (WR:4) in convincing fashion. Two well-taken goals, a rock solid defence and a little slice of luck were the recipe for China’s victory over the Hockey Champions Trophy reigning champions.

“We knew that Argentina has a great attack,” said China’s captain Cui Qiuxia, “So we knew our defence had to be good. We got the goals and then our defence worked very hard to keep the Argentina team out.

“We will have to do the same against Australia in the next game. And we will need to really keep the ball moving because Australia are a team that keeps a very good structure.”

Argentina’s captain Delfina Merino emphasised that her team’s biggest failing at this event so far has been its inability to turn pressure into goals. This was a fair summary of the final quarter of this game as Argentina peppered the China goal with shots, including numerous penalty corners and a shot from the captain herself that struck the crossbar. Star of the show for China was goalkeeper Chen Yi who saved time and again from the wave after wave of Argentinian attack.

For China there was no such problem. Both goals came in the first half and were the result of a swift break down the right-hand side of the pitch and then a slip back to where the forwards were lurking. First to pounce was Zhang Jingrong, whose quick stick work enabled her to turn her defender and slip past Belen Succi. The second goal came 15 minutes later and was scored by Li Hong – almost a mirror reflection of the first goal.

Reflecting on the game, Merino said: “We are missing our chances. We made a lot of chances against Holland and the ball didn’t go in. This game, we didn’t start so actively and China took their chances but in the second half we created lots. We must work on our corners that is for sure, and for us forwards, scoring is what we do and we aren’t doing that at the moment. We are a young team and we are learning but these are the immediate things we must work on.”

Great Britain (WR:2) looked to be on course for a sparkling victory as they raced to a 2-0 lead over Japan (WR:14). First Sophie Bray scored one of her typical poacher’s goals, darting in to jab the ball past Megumi Kageyama in the Japanese goal. Four minutes later and Tessa Howard scored her first goal in a major international, getting on the end of a smart move and striking home with composure.

As Giselle Ansley said in a post-match interview: “We should have built on that lead,” but Japan are not a team to ever stop trying and gradually the tide turned in favour of the Cherry Blossoms. As the Japanese midfield, led by the always-industrious Yui ishibashi and Hazuki Nagai, harried the Great Britain team, so a breakthrough looked all the more likely.

A save from Sabbie Heesh fell in front of Nagai and she had no hesitation in banging the ball back where it had come from. The defence could only watch as the ball flew into the roof of the net.

Great Britain were exhorted to take the game to Japan by Head Coach David Ralph in his half-time team talk but it was Anthony Farry’s Japan who started on the front foot. Nagai scored her second goal of the match. A penalty corner strike saw the player deflect the ball into the goal and bring the match onto equal terms.

The final few minutes saw Great Britain pushing for the winner. Anna Toman made some good runs down the right-hand side of the pitch and Sophie Bray was busy agitating for the ball in the Japanese circle.

It was not one-way traffic however and Japan will have been pleased to resume the form that saw them threaten the Netherlands on the first day of competition.

Speaking after the game, goal scorer Howard said: “Obviously we are disappointed not to be winning games but we are on a huge learning curve and every game is helping us build strong foundations. We might not be getting results at the moment but there is a huge sense of excitement around this squad.”

“It wasn’t a loss,” said Ansley, “but it was very frustrating. We got off to a great start and took an early lead but then we took our foot off the pedal and they came back into the game. We wanted to really go after them (Japan) and we had to win that game, so yes, it was really frustrating.”