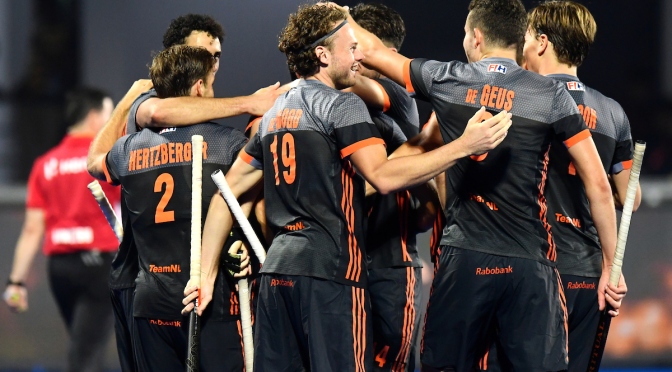 Bhubaneswar, India: Belgium and the Netherlands both claimed cross-over play-off victories at the Odisha Hockey Men’s World Cup Bhubaneswar 2018, securing their respective places in the upcoming quarter-finals of the competition on another high-quality day of action at the Kalinga Stadium.

Belgium’s 5-0 victory over four-time world champions Pakistan sets up a mouth-watering all-European quarter-final against Pool D winners Germany, a match that will take place on Thursday 13th December. On the same day, home favourites India have a quarter-final meeting against the Netherlands, who defeated Canada 5-0 today. The World Cup quarter-finals begin on Wednesday 12th December with Argentina facing England and top-ranked Australia going head-to-head against France, the lowest ranked of the 16 competing nations here in Bhubaneswar.

In the day’s opening cross-over match, Belgium (FIH Hero World Ranking: 3) had the better of the first period against Pakistan (WR:13), with the Olympic silver medallists from Rio 2016 taking a 2-0 lead against the giants of Asian hockey. Alexander Hendrickx opened the scoring with a low penalty corner before Red Lions captain Thomas Briels completed the simplest of finishes after a wonderful run along the backline from Nicolas de Kerpel.

Pakistan improved greatly in the second quarter and could well have reduced the deficit through Ali Shan and Muhammad Irfan Jr, who both missed the target when they had a clear sight of goal. Those missed opportunities were punished just before half time when Cedric Charlier’s speculative cross-shot took a wicked deflection off the stick of Pakistan captain Ammad Butt and flew into the goal to give Belgium a 3-0 lead at half time.

The team coached by Shane McLeod added a fourth goal to their collection when Sebastien Dockier finished off a flowing team move to leave Pakistan with a mountain to climb in the final 25 minutes. As they have done throughout the event in Bhubaneswar, the Green Shirts gave it everything but could not get the goal their endeavour deserved, with Tom Boon completing a 5-0 score-line from the penalty spot in the fourth quarter.

It was a special day for Belgium duo Florent van Aubel and Simon Gougnard, with the former making his 200th international appearance for his country and the latter being named Odisha Player of the Match for his creativity in midfield.  Speaking after the game, Van Aubel said: “I think we played our best game in the tournament so far. Winning 5-0 and getting into the quarter-finals, I think it’s really good. The whole team worked really hard to get there, so it’s really positive. We knew we were going to face Germany or the Netherlands in the next round. It’s Germany. We have to get ready for them. They’re playing really well at the moment, so I expect a tough game.”

With a quarter-final meeting against host nation India on the line, the cross-over match between the Netherlands (WR:4) and Canada produced a fascinating opening fifteen minutes as the Pan-American team frustrated the European champions. Canada goalkeeper David Carter – later named Odisha Player of the Match – bravely charged down a shot from Bob de Voogd that crashed against the shot-stopper’s helmet, while Mink van der Weerden wasted a penalty corner effort towards the end of the period.

The breakthrough arrived in the opening moments of the second period when defender Lars Balk found himself at the other end of the field to smash a blistering first-time effort under the cross-bar, producing the sort of finish that most strikers would be proud of. Carter denied the Dutch a second when he saved a penalty stroke from Jeroen Hertzberger, although the Netherlands did take a 2-0 lead into half-time when Robbert Kemperman guided home a cross-shot from Thijs van Dam.

The Netherlands put some clear water between themselves and the Canadians with a solid display in the third quarter, netting twice to take the score to 4-0. Van Dam scored the third while Kemperman was the creator of the Netherlands’ fourth goal, stealing possession and dancing through the Canadian defence before eliminating goalkeeper Carter with a perfect pass to Thierry Brinkman, who walked the ball over the line to effectively end the contest with quarter to spare.

The scoring was completed in the fourth quarter by Thijs van Dam, starting and finishing a rapid counter-attack to give the Netherlands a 5-0 victory over Canada to confirm a quarter-final meeting against India on Thursday.

Speaking after the match, Netherlands captain Billy Bakker said: “We wanted to play better against Canada than we played against Pakistan. We just looked at the statistics and we had about 30 circle penetrations and we made five goals, so it could be more but we should be proud of this result. We’re very happy and we’re confident for playing the quarter-final against India. It’s lovely. My team gets a lot of energy in front of this big crowd and this enormous stadium so it’s only an advantage for us.”

Assessing his team’s performances so far whilst also looking towards the meeting against Olympic title holders Argentina, England’s Adam Dixon said: “We’ve grown into the tournament and improved game by game. Our young players have really stepped up and made themselves counted for. Argentina are a strong and experienced team and we will have to be at our best to get a result. However, we are full of confidence and looking forward to the challenge.”

Looking ahead to his team’s quarter-final against France, Australia’s Trent Mitton – who will make his 150th senior international appearance in the match and whose father Grant was part of Australia’s 1986 World Cup-winning side – said: “On the World Cup so far I think our team is going really well and there is a good feeling around the group. We are looking forward to getting to the business end of the tournament which starts on Wednesday with our quarter-final. Being able to play the 150th in a World Cup quarter final is pretty special as well. It will be a big game and the crowd will be huge.”