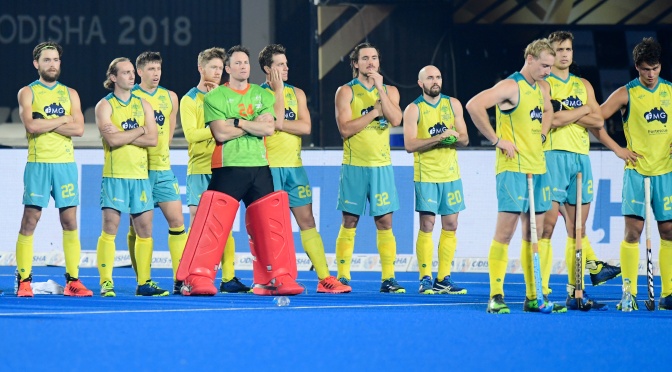 Saturday 15 December 2018 | The Kookaburras have suffered World Cup heartbreak losing Saturday night’s semi-final to the Netherlands in a shootout after earlier equalising with less than 30 seconds to play.

The world number four Dutch edged Australia 4-3 in the shootout with goalkeeper Pirmin Blaak denying Daniel Beale, in his 150th game, in sudden death to clinch the victory in Bhubaneswar, India.

Blaak was named Man of the Match after making numerous saves from Australia’s 10 shots on target earlier in the match, with the Kookaburras dramatically rallying from a 2-0 half-time deficit, eventually with a last-minute Eddie Ockenden equaliser.

The result ends the top-ranked Kookaburras’ charge for a third straight World Cup title, having lifted the trophy in 2010 and 2014.

It also means three-time champions Netherlands will play first-time finalists Belgium in Sunday’s decider from 12:30am AEDT on Monday morning.

The Kookaburras’ World Cup campaign isn’t over despite the defeat, as they’ll play England for bronze from 10pm AEDT on Sunday.

Earlier, Kookaburras veteran Ockenden, who was one of two members in this side from both 2010 and 2014, had dramatically equalised with 27 seconds to play.

Australia had trailed 2-0 at main break but heroically fought back with Tim Howard netting his first international goal in the 44th minute, before Ockenden’s late leveller.

The Dutch scored in both the first and second quarters from Glenn Schuurman (9’) and Seve van Ass (20’), with the latter’s shot deflecting in off Howard.

Both sides raced out of the blocks, starting the game with attacking intent, but it was the Dutch who created the clear-cut chances with Kookaburras keeper Andrew Charter called into action to save Mink van der Weerden’s fourth minute flick.

Five minutes later, Jonas de Geus cut the ball inside the circle after a baseline run, finding Schuurman who converted for only his third international goal.

Mirco Pruijser deflected Billy Bakker’s drive into the post before the first break as Australia withstood the Dutch pressure.

Australia’s top scorer Blake Govers forced Blaak into an 18th minute save from a second attempt at a short corner, while Seve van Ass dragged wide moments later from a Dutch PC.

Govers was denied again by Blaak before the Dutch added a second when van Ass’ cutback from the baseline was fortuitously deflected beyond Charter by Howard.

The Netherlands lost Valentin Verga for five minutes due to a third quarter yellow card but Australia couldn’t capitalise on their numerical advantage, with the Dutch having the better chances in the third.

However, Australia did pull a goal back in the 44th minute after Trent Mitton did well to win a penalty corner. The Kookaburras employed a penalty corner variation which appeared to have failed until Howard beat Blaak with a low slap.

The Kookaburras opted to pull Lovell for an extra outfield player with five minutes to go and almost levelled when Govers again forced Blaak into a good save from a 58th minute short corner.

With less than 30 seconds on the clock Australia got their reward when Beale raced forward with his pass into the D turned by Ockenden under Blaak with the aid of a Dutch deflection.

The late equaliser sent the game to the dreaded shootout, where Australia’s Aran Zalewski shot over with the first attempt before Charter pulled the Kookaburras level at 1-1 after two shots with a good save to deny Pruijser.

Tom Craig put Australia ahead with the next chance and Charter had the Kookaburras in the box seat when he saved from Robbert Kemperman leading 2-1 after three shots each.

However, Brand failed with his attempt, before the Dutch levelled through van Ass. Jake Whetton and Thijs van Dam traded goals to send the shootout to sudden death.

The Dutch went first in sudden death with Jeroen Hertzberger beating Charter before Blaak swept away Beale’s chance to earn the Dutch a 4-3 shootout win to leave Australia heartbroken.