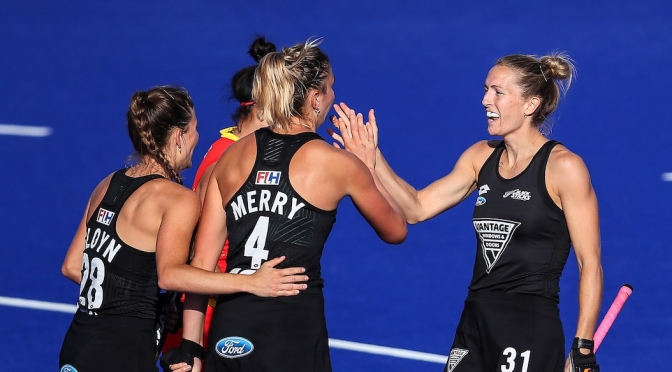 Frederique Matla scored twice as the Netherlands women stormed to a 5-0 away victory against USA, while a double from FIH Pro League top scorer Olivia Merry earned New Zealand’s women a 2-0 triumph over visitors China on Sunday (17 February).

The Netherlands (FIH World Ranking:1) travelled to North Carolina’s Wake Forest University in Winston Salem to take on USA (WR:12), a team playing their first FIH Pro League match on home soil and their second in total after their narrow shoot-out defeat against Argentina in Cordoba at the start of February.

The Dutch reigning world champions – complete with newly crowned FIH Player of the Year Eva de Goede and Coach of the Year Alyson Annan – made a stunning start against the team coached by former Netherlands ace Janneke Schopman, dominating the play in the opening two quarters to open up a 5-0 lead by half time. The exceptional Lidewij Welten scored a superb solo goal to put the Dutch ahead in the fifth minute before Laurien Leurink and Frederique Matla both found the target ahead of the quarter-time break. USA’s Laura Hurff failed to take advantage of an excellent chance to reduce the deficit before a terrific backhand strike from Marloes Keetels and a penalty stroke converted by Matla established a lead that would prove to be unassailable.

USA gave an excellent account of themselves in the third period to deny the top ranked team in world hockey any clear-cut chances, although Maria Verschoor came agonisingly close to grabbing a sixth goal at the start of the fourth quarter when she rattled the post. It was the closest that the Netherlands came to adding to their score-line, but with 17 shots compared to two for USA, the Dutch had produced the perfect response to their recent 1-0 away defeat at the hands of Australia and will feel justifiably confident going into their meeting against Argentina in Buenos Aires on 24 February. The win moved the Oranje up to third in the FIH Pro League standings, which can be found by clicking here.

“It felt great, 5-0 is a good game”, said Netherlands attacker Frederique Matla, who was named Player of the Match. “We have a few points to look at, no goals [scored] in the second half, so that is something we will look at.”

USA team captain Kat Sharkey, whose team will be heading to Australia for their next FIH Pro League match on 2 March, said: “I think that there were some strong moments for us in this game. I think Holland is obviously number one in the world for a reason. You give them an opportunity and they are going to make the most of it, so I think we can learn from our mistakes and take the next steps moving forward. I think we were able to step up our fight a little bit in the second half and bring the energy, which is a positive that we can take from this game.”

On the other side of the world in Christchurch, New Zealand’s Black Sticks (WR:6) hosted China (WR:10) at the Nga Puna Wai Hockey Stadium. China came into the match on the back of a 4-3 defeat against Australia’s Hockeyroos in Hobart last weekend, while the home favourites were beaten 3-1 by Germany in Christchurch just two days ago.

The teams could not be separated in the opening two quarters of the match, although there was certainly plenty of action at both ends of the field. China failed to convert from two penalty corners in the first quarter and found themselves temporarily reduced to nine players in the second period thanks to disciplinary cards to Xu Wenyu and captain Cui Qiuxia, although the Black Sticks could not take advantage of the situation.

However, a yellow card to China’s Gu Bingfeng early in the third quarter proved costly, with New Zealand making the most of the extra player before competition top scorer Olivia Merry produced a cool finish into the bottom right corner of the China goal.

China desperately searched for an equaliser in the final quarter, with Song Xiaoming going close before the Asian giants replaced their goalkeeper with an outfield player. The tactic would have paid off were it not for two wonderful saves from New Zealand goalkeeper Grace O’Hanlon, with Brooke Neal also making a crucial goal-line clearance.

The result was put beyond all doubt three minutes from full time when Merry scored her second goal of the game from the penalty spot, somehow squeezing her shot between the pads Ye Jiao moments after a penalty corner effort had been illegally stopped on the line by a China defender. It was Merry’s fifth goal of the FIH Pro League, three more than any other player has managed at this early stage of the competition.

“It was a little bit stressful out there tonight, especially when they pulled their goalkeeper”, said New Zealand shot-stopper Grace O’Hanlon, who was named Player of the Match. “We did a really good job in our defence. Next game we want the same again. I think we really take heart from wins like this, they really spur us forward.”

China captain Cui Qiuxia said: “Today we are unlucky. We had more chances but we made a lot of mistakes. I hope that next game we can learn from that.”

The FIH Pro League action continues next weekend with the men’s and women’s teams of Germany and the Netherlands in action against Argentina in Buenos Aires, while China’s women host Great Britain in Changzhou. To see the match schedule, click here