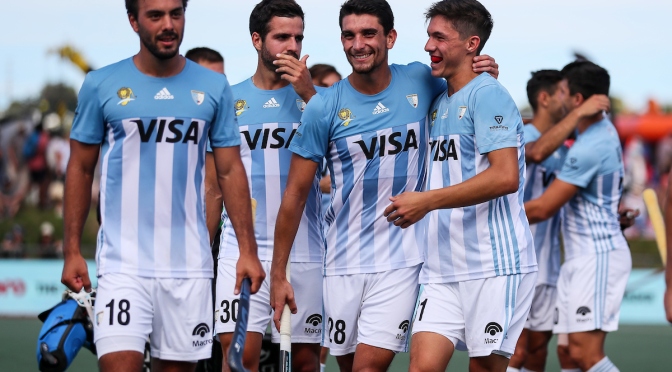 It was a memorable day for the national men’s and women’s teams of Argentina as both sides earned victories over the Black Sticks in front of a packed North Harbour Hockey Stadium in Auckland on Sunday (10 March).

A pre-match injury to veteran striker Matias Paredes was not enough to stop an inexperienced Argentina men’s team from taking a 2-1 win over the Black Sticks, with Lucas Vila producing a Player of the Match performance as goals from Martin Ferreiro and Maico Casella fired Los Leones into fourth position in the FIH Pro League standings. To see the current men’s FIH Pro League league standings, click here.

Argentina’s women were in sparkling form against the hosts, running out 3-1 winners thanks to strikes from Agustina Albertarrio, Micaela Retegui and Rosario Luchetti. The result moves Argentina into third position in the standings, with New Zealand in fifth. To see the current women’s FIH Pro League standings, click here.

Argentina’s men (WR:4) took to the field in Auckland without some of their most experienced players; goalkeeper Juan Vivaldi and defender Pedro Ibarra were both absent, as was penalty corner ace Gonzalo Peillat. Head Coach German Orozco opted to give FIH Pro League debuts to five players, with teenager Lucas Toscani and 22-year-old Thomas Habif – brother of Argentina women’s internationals Florencia and Agustina – both earning their first international caps.

Argentina’s youthful squad of just 16 players were dealt a blow before the match had even started, as veteran striker Matias Paredes was forced out of the contest through injury. Despite their numerical disadvantage against the 18 players of New Zealand (WR:4), Argentina’s young guns gave an excellent account of themselves throughout the contest, with brilliant attacker Lucas Vila providing the required guile in a remarkable victory for the depleted Olympic champions.

Following chances at either end for Argentina’s Maico Casella and Stephen Jenness of New Zealand, it was the visiting team who opened the scoring in the second quarter thanks to Martin Ferreiro, who capitalised on a defensive error to lift the ball over onrushing goalkeeper George Enersen to find the target from a narrow angle.

New Zealand’s Jenness and Jared Panchia came close to levelling the scores in the third quarter, with Casella and the lively Vila both forcing saves from Black Sticks’ replacement goalkeeper Richard Joyce ahead of an action-action-packed final period. Casella doubled Argentina’s advantage with a low penalty corner to leave the hosts with a mountain to climb if they were to claim their first win of the FIH Pro League.

Black Sticks Head Coach Darren Smith threw caution to the wind in the final ten minutes, replacing goalkeeper Joyce with an outfield player to turn up the heat on their opponents. The impact was almost immediate, with Kane Russell slamming a penalty corner inside the left post to set up a grandstand finish.

A green card for debutant Habif with three minutes remaining gave the home favourites a two player outfield advantage over the visitors, but it did not stop the team from South America claiming an impressive victory when fate seemed against them.

“We played a really smart game, especially in the first half when we defended really good”, said Player of the Match Lucas Vila after the game. “We had a few injuries last week, and new guys who played their first game today. I’m really proud of this group. The ones who played in this game showed that they had the quality to do it. They did really well.”

Reflecting on the match, New Zealand captain Arun Panchia said: “We are working really hard, it’s been a long time since we won a game. It was another tough performance today. We had a few chances but couldn’t capitalise on them and we couldn’t really build any momentum through the game.”

Argentina’s women (WR:4) produced an excellent first half performance as they set about the task of matching their male compatriots, with their attacking players proving too hot to handle for New Zealand (WR:6) as the South American giants opened up a 2-0 lead.

Agustina Albertarrio put Las Leonas ahead towards the end of the first quarter, creating space for herself before drilling emphatically past goalkeeper Grace O’Hanlon from eight metres out. That advantage that was doubled when Micaela Retegui – daughter of Leonas’ Head Coach Carlos ‘Chapa’ Retegui – forced home from close range, via the stick of New Zealand defender Megan Hull, after an neat interchange of passes with Carla Rebecchi.

New Zealand had the best chance of the third quarter from a penalty corner situation but could not beat Argentina goalkeeper Belen Succi, who watched her side move into a 3-0 lead early in the fourth period. Rosario Luchetti dived in to score a wonderful deflection, guiding Albertarrio’s perfect pass from the left into the goal via the right post.

The home side rallied hard in the latter stages and created numerous opportunities from both open play and penalty corners, but the Argentina defence – lead by the outstanding Sofia Toccalino, who was named Player of the Match –  held firm to take the win and move up to third position in the league standings.

Speaking after the match, New Zealand captain Stacey Michelsen said: “I think we had a lot of possession through the midfield today but probably didn’t create enough opportunities going into the attacking 25. We know how clinical they are in their attacking circle and we certainly let them get away today. Their ball retention and individual skill level is so high and we certainly didn’t match them on that today.”