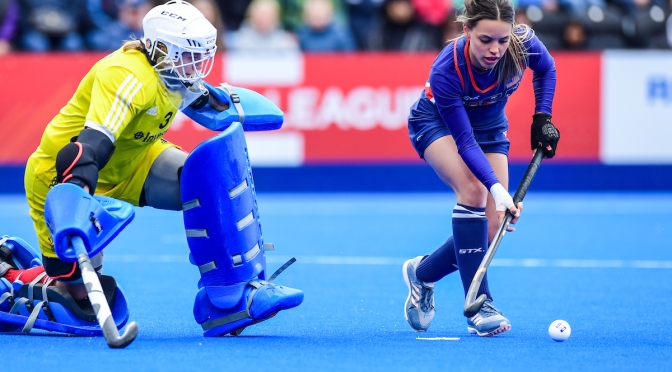 Great Britain women were held to a 1-1 draw by USA in their first FIH Pro League match on home soil, but emerged with two points from a possible three after winning the shoot-out on a windy day at the Lee Valley Hockey & Tennis Centre in London.

The hosts – 3-1 winners against the Americans in Pennsylvania last month – were frustrated for long periods before Giselle Ansley opened the scoring ahead of half time, but Lauren Moyer’s third quarter strike prove to be enough to deny GB an outright victory before reserve goalkeeper Amy Tennant came off the bench to help the home favourites earn a bonus point in the one-on-ones.

The result leaves Great Britain sitting sixth in the FIH Pro League standings, although they have improved their points percentage to 33.33, narrowing the gap on fifth-placed New Zealand. Despite  earning a valuable point on the road, USA remain bottom of the table with 14.81 percent. To see the current women’s FIH Pro League standings, click here.

The best chances of what was a nervy opening quarter went the way of Great Britain (FIH World Ranking: 2), with Player of the Match Lily Owsley crafting a chance out of nothing with a surging 40 metre run that was let down by a tame shot easily cleared by USA (WR:12) goalkeeper Kelsey Bing. The American shot-stopper looked certain to concede in the final minute of period when Erica Sanders sent a fine pass across the face of the USA goal, with both Hannah Martin and Laura Unsworth perfectly positioned but somehow failing to get that crucial touch in front of goal.

The second quarter was far more even than the first, with penalty corners opportunities being wasted at both ends of the field before a dramatic final minute of the half. Giselle Ansley triggered a huge roar from the watching fans at Lee Valley when she slammed home a low, powerful penalty corner drag-flick, a lead that was almost cancelled out seconds later when Lauren Moyer had the goal at her mercy but hesitated with her shot, allowing Great Britain to take a 1-0 lead into the break.

The hosts were largely dominant in the third quarter and so nearly doubled their lead through Tessa Howard, who showed brilliant improvisation to smash a backhand volley towards the USA goal only for Bing to produce a spectacular save, diving to he left to push the ball away to safety. However, it was the Americans who levelled the scores, with Moyer on hand to tap in from close range from a second phase penalty corner.

Great Britain came closest to a winner in the final quarter when Ansley smashed a backhand effort that clipped the left corner of the goal. The hosts had been a couple of centimetres away from winning the contest, but instead now faced a shoot-out to determine which nation would claim the bonus point.

The goalkeepers were the stars of the shoot-out, with USA’s Bing making three saves but Amy Tennant – who replaced regular time goalkeeper Sabbie Heesh for the one-on-ones – only conceded once, with goals from Tessa Howard and Anna Toman sealing a 2-1 win to give Great Britain the bonus point.

“We are disappointed as we felt like we stopped playing a little bit,” said Anna Toman after the match. “The main thing is we have to lift ourselves as a team and go out there and, thankfully, [Amy] Tennant did the job for us. A few of us scored which was really good to get the two points.”

Reflecting on stepping into the contest from the bench specifically for the shoot-out, Great Britain goalkeeper Amy Tennant said: “It’s great being fresh. It is something I had to mentally prepare for, and I felt ready for it so that was really good.”