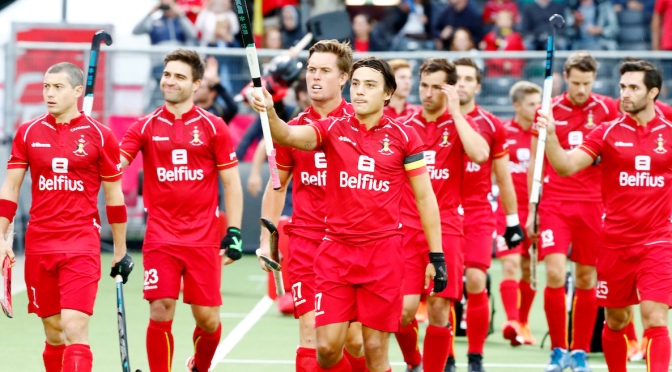 The Belgian Red Lions put on a cracking show in front of a big home crowd at Wilrijkse Plein to start the Belfius EuroHockey Championships in party mode.

Following a lively opening ceremony, Belgium came flying out of the blocks, playing at a pace and intensity that the Spanish found really hard to match. A range of accurate, crossfield overhead passes were also damage and the chances soon started to come with Florent van Aubel and Manu Stockbroekx breaking into the circle.

It led to a couple of penalty corners which Quico Cortes did brilliantly to save. But a third corner in the ninth minute was nailed by Alexander Hendrickx with a powerful drag-flick. And they kept coming, running up five corners before half-time and they doubled the advantage following another swift interchange. The ball broke to Victor Wegnez who slammed home from mid-circle.

Spain did eventually gain a foothold in the game after spending so much time under pressure and they gave the hosts a real run for their money. Pau Quemada?s drag-flick drew the best from Vincent Vanasch amid a couple of waves of attack. And they probably carried the greater threat in the third period with Diego Arana and Alejandro de Frutos also found the Belgian goalkeeper in robust form.

But Belgium always carried threats from many different points of attack. They got a fortuitous third goal to kill off the game with eight minutes to go. A crash ball got stuck under Cortes’s pads and Tom Boon was alert to clean up the ball when it spun free. Hendrickx added a second corner goal two minutes later and Antoine Kina scored the pick of the strikes soon after with a brilliant shot from the top after Van Aubel’s approach work down the left.