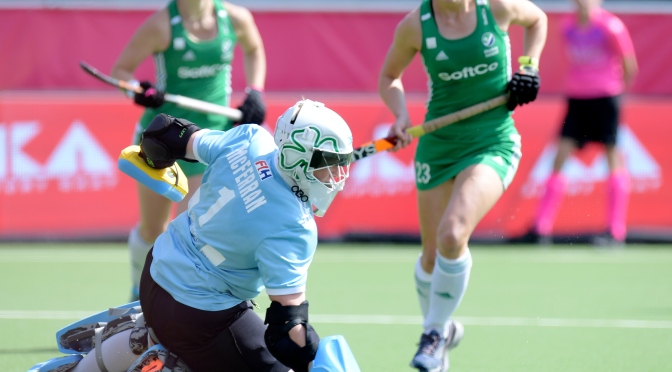 An exciting match for many reasons as the Irish Women finished with a level score against World Ranked Number 5 Germany this afternoon in Antwerp. Unfortunately, a win was required to progress to the semi-finals of the competition.

Speaking after the match, Head Coach Sean Dancer said “Obviously it’s very disappointing for us to lose a must-win game, but for me, that was a good scenario – a quarter-final situation.

All credit to the girls, we got a draw, but unfortunately, we needed a draw and weren’t quite good enough”.

Germany took the lead eight minutes into the opening quarter with a shot from Maertens finding the back of the net. Despite Germany dominating possession, Ireland were relentless and continued to press them. The equaliser came in the final minute of the opening quarter when a penalty corner for Ireland rebounded off German Keeper Sonntag, and Katie Mullan managed to secure a pass to a well-placed Sarah Hawkshaw to bring it home.

Germany’s Hannah Gablac made her presence felt in the second quarter, but Ireland’s defence remained strong. A penalty corner to Germany save Grote flick for the goal, but McFerran got her pad to it nicely to keep the score level. Ireland were lucky later in the quarter when McFerran rightly stepped to defend one side of the goal. Although Elisa Grave managed to position herself dangerously the other side, her attempt from inches out hit the post.

Ireland had a few opportunities leading up to half-time. Gillian Pinder had a shot saved by Sonntag, with Deirdre Duke securing the rebound, unfortunately sending it wide while Lena Tice continued to frustrate German attempts in the Irish circle.

The Irish defence was solid in the third quarter, fending off several attacks by Germany. While McFerran was strong again as Rebecca Grote managed to take a shot from a German penalty corner. Meanwhile, her counter-part Sonntag continued to prevent Ireland taking the lead, with shots from Daly and two penalty corners for Ireland both well saved.

The final quarter was marked by much excitement. Sonntag was on form again as Chloe Watkins hit a beautiful shot into the circle to find Daly, whose shot was saved. Germany proceeded to get a run shortly afterwards, entering the Irish circle and forcing McFerran out to defend. The ball crossed the line however the video umpire was called upon to confirm the goal before it was granted, making the tension in the stadium palpable.

No goal was given, with the video umpire stating the whistle had blown before the ball crossed the line, with the sides remaining level. Germany went on to secure a string of penalty corners shortly after, ending in them being granted a penalty shot. Nike Lorenz stepped up to take it, but Ayeisha McFerran was never in doubt, saving it comfortably.

Ireland chose to take McFerran off with 3 minutes left on the clock to increase outfield numbers. Despite Katie Mullan getting a nice run up the pitch, passing to Evans who found O’Flanagan, German Keeper Sonntag prevented another goal forcing the ball wide. German player Lorenz received a yellow card with less than 3 minutes remaining, bringing Germany down to 10 players; however, they managed to hang on without conceding a goal, with the final hooter signalling a 1-1 full-time score.

The Irish Women played well and will take lots of positives from the match against Germany in the long-term; however, they now move to Pool C to play the third-place finisher of Pool A who have yet to be decided. The match will take place at 14:45 Irish time on Friday afternoon.

Meanwhile, the Irish Men’s squad will face off against England tomorrow at 14:45 Irish time.