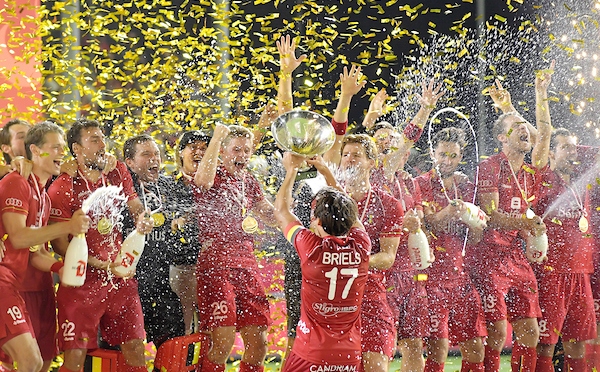 Belgium produced a memorable performance to win their first ever Belfius EuroHockey Championships title, as the World Cup holders added another major title to their collection. The four-star Dutch eased their way past Germany to a bronze medal. Wales and England retain their place in the top tier of European hockey

The Red Lions produced a rip-roaring start to build a huge 4-0 lead by half time. After that they never looked like relinquishing it, sending the sold-out crowd into raptures at Wilrijkse Plein.

The Belgians had beaten Spain 5-0 in the opening game of the tournament and they produced an identical victory to bookend the tournament, as the decibel levels went through the roof.

The first few minutes were end-to-end with LoỈck Luypaert denied by Quico Cortes while Enrique Gonzalez found a foot in the sixth minute but Arthur van Doren produced an excellent block.

John-John Dohmen fittingly started the ball rolling on the score sheet. He missed last December’s World Cup final through illness but has had a remarkable year coming back from that, helping his club (Waterloo Ducks) to win the Euro Hockey League. He guided in Victor Wegnez’s cross into the goal allowing Belgium to take the lead in the 10th minute.

But Spain were not sitting back, and they drew the best out of Vincent Vanasch before the end of the quarter. The second quarter saw the Red Lions in rampant form, transforming the lead from one to four. Gauthier Boccard delivered a precise ball from the left wing giving Florent van Aubel the chance to tap in a 16th minute second goal. Two minutes later Tom Boon picked out the top corner with a drag-flick, from a corner. And they went four to the good with 27 minutes gone, when Emmanuel Stockbroekx cut back from the baseline and powered in on his backhand.

In a strong start to the second half, Xavi Lleonart fizzed a reverse at goal that Vanasch denied while Spain had a number of corners. A couple were challenging but Belgium managed to keep them out, including a video referral for a penalty stroke.

But the party got back into gear when Thomas Briels produced an audacious piece of skill to win a corner, which Alexander Hendrickx duly slotted in.

Spain kept plugging away and drew several more saves from Vanasch who was in sparkling form once again, to maintain his and Belgium’s clean sheet to win the title and the Olympic ticket.

In the individual tournament awards, Victor Wegnez was named the player of the tournament. The Netherlands’ Jonas de Geus was the Under-21 talent while Vincent Vanasch was a deserving winner of the goalkeeper award.

The Netherlands were the side looking most likely to make the breakthrough in the first quarter after an early penalty corner was kept out. Diede van Puffelen drew an outstanding diving save from Victor Aly from close range, while he also kept out Bjorn Kellerman.

A goal came in the 19th minute when Jeroen Hertzberger laid an inviting pass on to Kellerman charging forward. He raced into the circle and hit the perfect shot into the bottom corner.

In reply, Germany had four penalty corners in the second quarter but could find no way through the Dutch defence as Sam van der Ven made some crucial stops. He somehow also kept out Florian Fuchs’ shot from the baseline with the bottom of his foot with the ball rolling along the goal line and out to safety.

The second half started in a calmer fashion with the Dutch looking to play a fast counter game and the Germans having to push the tempo. The second Dutch goal came in the 43rd minute when Thierry Brinkman got to the baseline and picked out Mirco Pruijser waiting at the near post for the touch home.

A Tom Grambusch corner shot was defended to safety to close out the third quarter at 2-0 to the Dutch. Jip Janssen went within centimetres of adding to their total when his shot ricocheted off the bar.

Germany, meanwhile, kept pressing forward with Christopher Ruhr at the heart of things but both corner and open play chances were kept at bay.  On the break, Hertzberger drew a good block from Aly again, keeping it interesting into the last five minutes. But the Rotterdam forward would complete the win with two minutes left from the penalty spot when he was fouled on the way through on goal.

For good measure, van der Ven made a brilliant last minute save from Mats Grambusch. Lukas Windfeder did find the goal with a shot but video showed danger and it was ruled out.

For good measure, Mink van der Weerden nailed a final hooter penalty corner to make it 4-0 adding an extra gloss to the win.

England’s earlier 3-0 win over Scotland meant both sides retained hopes of staying – Wales with a two-goal lead, Ireland with a win of any description.

Two first half penalty corners from Gareth Furlong put them in control and they duly took full control with further scores from Dale Hutchinson and Ben Francis.

Sam Ward fired home from play and a corner either side of an Ashley Jackson goal for a 3-0 convincing advantage. They ending their campaign in fifth place.

Scotland’s first shot came with seven minutes to go but Harry Gibson saved from Andy Bull to keep the clean sheet in place. Alexander closed out the tie with a couple of spectacular saves while Scotland finished with a trio of corners to no avail, meaning the Scots were left to wait on the result of Wales versus Ireland.