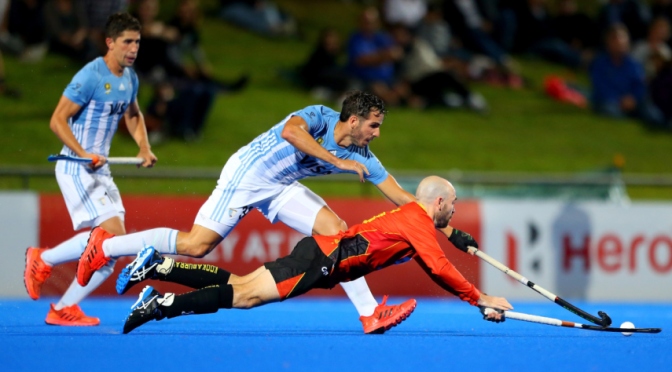 With all drawn matches in the FIH Pro League going to a penalty shootout, Argentina prevailed 3-1 in the shootout decider to gain an additional bonus point from the contest.

In Eddie Ockenden’s record equalling 365th Kookaburras appearance, it was fellow Tasmanian Welch marking his first international cap since suffering a stress fracture in his back last April with the crucial equaliser.

The Kookaburras, sporting a special Indigenous playing strip, stormed out of the blocks with two goals in the opening ten minutes.

But the Kookaburras’ advantage was swiftly halved when a first timed strike from Martin Ferreiro found the bottom right corner.

Argentinian penalty corner specialist Jose Tolini netted his seventh goal of this Pro League campaign to level the scores at 2-2.

The non-stop end to end action continued after half time and after Tolini struck the woodwork with another effort in the 35th minute, the strong crowd didn’t have to wait long for another moment of brilliance.

A stunning reverse stick strike from Lucas Martinez into the roof of the net from a tight angle capped off a world class attacking move from the South Americans to put them in front.

The Kookaburras were made to be patient as they went in search of an equaliser, enjoying large periods of possession and winning the circle entry count 26-14, before Welch took his chance with aplomb.

Having only entered the match after three quarter time, Welch grabbed a crucial touch to guide Matthew Swann’s crash ball into the top left corner of the net.

In the shootout, Flynn Ogilvie opened the Kookaburras account, but it mattered little as Wickham, Josh Simmonds and Swann all had their efforts well saved by Argentina goalkeeper Emiliano Bosso, while in turn the visitors clinically dispatched their three efforts.

“I thought we started off very well, then let them get back in the game and let them get in front,” said Swann post match.

“We were able to come back in the fourth quarter but unfortunately we couldn’t come away with the win.”

“Something we need to work on is shootouts, because it’s becoming prevalent in today’s game so we need to be better in that area so that we can come away with the win rather than draws and losses.”

Having missed the recent FIH Pro League matches against India, Swann said he was looking forward to lining up alongside Ockenden when he breaks the Kookaburras games record in Match 2.

“I’m stoked I can be out there tomorrow with Eddie when he makes his milestone game tomorrow,” said Swann.