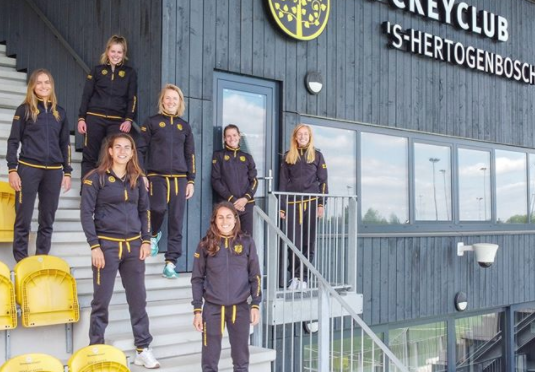 In addition to the signing of Laura Nunnink , Emmeline Oonk is promoted to the from the youth setup.

Fréderique also plays for the club at the Oosterplas in the next three seasons, just like Imme.

Margot and Pleun have signed two year extensions whilst Lidewij and Ireen one year. “With these extensions, we lay a very strong foundation for the future of the team,” says board member Top Hockey Vera Vorstenbosch. “We are proud of that. We can continue to build on the ambition of the club and give our talents the opportunity to develop further. ” Vera is not only happy with the contract extension of six, she is also enthusiastic about the addition of Emmeline Oonk (18) to the selection.

“Emmeline has shown a lot of growth in her playing and role in the A1 in recent years. She can compete at the highest level under the wings of our experienced players.”

Following the extensions and the arrival of Laura Nunnink and Emmeline Oonk to the club, Lieke Hulsen and Julia van den Heuvel have moved on to pastures new.

The club has decided not to renew Lieke’s contract, ending her career with the Bossche team. She played for the team for eleven seasons and became national champion eight times. In addition, she won seven European titles, two national hall titles and a European hall title. She won an European Championship and a World Cup with the Dutch indoor hockey players. “Saying goodbye to Lieke under the current circumstances is not ideal,” responds Vera. “We had hoped that we could give her a nice ending of her career. For years she has done the best she can, with her energy and work ethic. Her nose for the goal, including clenched fist after a goal, are known far beyond our city. We are extremely grateful to her for all the years she has given us. And we hope that we can look back on her beautiful time at the Oosterplas later in the year. ”

Julia van den Heuvel studies in Utrecht and has decided in good consultation to continue her career at Kampong and signs a four-year contract there. “Kampong is a fantastic step. In Utrecht, where she also lives, she gets many opportunities to grow as a hockey player. We look forward to her development. But with her eager to learn and hard-working attitude, that will be all right.”