No. 9 Virginia field hockey played an impressive pair of games over the weekend, defeating No. 5 Louisville on the road before traveling to Oxford, Ohio to secure another win against Miami University. The Cavaliers (11-3, 2-2 ACC) were powered by a stellar offensive performance in a fourth quarter comeback to defeat ACC foe Louisville (10-2, 2-2 ACC) 2-1 and used a strong defensive performance to blank the RedHawks (7-7, 2-1 MAC) 1-0.

END_OF_DOCUMENT_TOKEN_TO_BE_REPLACED

After Friday’s overtime loss to Penn State, it seemed No. 8 Northwestern’s season was on the verge of taking a turn for the worst. Sunday, the Wildcats reversed the narrative in a 4-1 win over No. 19 Rutgers.

END_OF_DOCUMENT_TOKEN_TO_BE_REPLACED 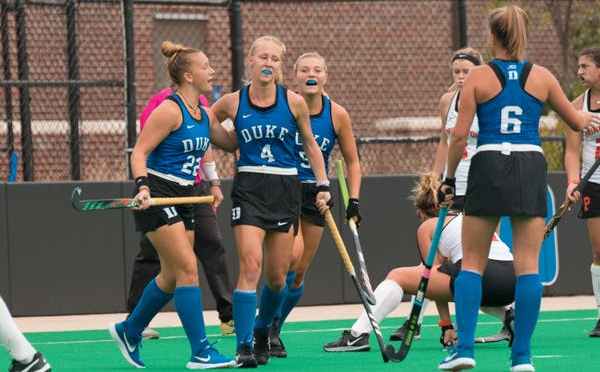 With a ranked in-state rival coming to town, Duke needed to put together a complete performance under the Friday night lights.

The No. 4 Blue Devils parlayed a stifling defense and timely goals into an impressive 4-0 victory against No. 20 Wake Forest at Williams Field at Jack Katz Stadium. With only four shots on goal by the Demon Deacons, Duke picked up its first ACC win of the season in dominant fashion.

“I think the fact that our schedule is loaded with really strong opponents that are having great seasons and getting recognized is enough motivation,” Duke head coach Pam Bustin said. “We love to play a game of field hockey that is going to challenge us, tonight it just was a great opponent, it’s a regional opponent, it’s an ACC game. We’re home, and I think we have a few things that we wanted to correct here at home over the last couple of matches, so I’m really proud of the team tonight for the effort that they gave and for the work that they did all week to prepare for a dangerous Wake team.”

In a first half marked with intensity and physical play, Duke’s aggressive offensive strategy led to the Blue Devils (9-3, 1-2 in the ACC) taking a 2-0 lead to the break. Duke stayed in position defensively and kept the Demon Deacons (5-7, 0-3) from finding soft spots in the circle.

Wake Forest was unable to find any consistent rhythm offensively and the energy displayed by the Blue Devils resulted in opportunities to score when they pushed the tempo. With the Demon Deacons often packing the circle defensively, Duke tried to find ways to score in transition by quickly advancing the ball to forwards ahead of the Wake Forest defense.

Blue Devil senior back Jillian Wolgemuth ran the back line of the offense by swinging the ball towards the sidelines and finding holes near the middle of the field. Goals by sophomore forward Leah Crouse and freshman forward Hannah Miller, both off of deflections, swung the momentum in favor of Duke.

The tendencies shown by the Blue Devils during last weekend’s consecutive losses were corrected during the outing against the Demon Deacons. Duke played as a unit and maintained composure against a Wake Forest team that had won four of its previous five games coming into Friday’s contest.

“We stuck to our defense, we didn’t panic and overcompensate for things, we stayed together and that’s one of the things that we took away from last weekend that we didn’t do,” Bustin said regarding Duke’s improvement from its losing skid. “I just have to credit this group for the work that they did all week in trying to own their game and get back to our game.”

Coming out of halftime, Duke stayed with the plan and continued to spread out Wake Forest’s defense. The Blue Devils offensive game plan resulted in open passing and cutting lanes, taking a significant amount of time off the clock when the Demon Deacons needed a quick rally.

The movement exhibited by Duke kept Wake Forest off balance and late goals by Miller and Olivia Sahaydak sealed the deal for a Blue Devil team in need of a win to build off for the rest of the regular season.

Defensively, Duke’s activity in preventing the Demon Deacons from attacking the circle on a consistent basis was a result of preparation and attention to detail. Communication between the defenders and goalie Sammi Steele kept Wake Forest from finding creases in the Blue Devils defense.

“They were putting a lot of pressure on us obviously and trying to cut the field and keep us to one side. I think when we stayed within our structure, stayed composed and were able to bounce the ball in and out we were really successful,” Wolgemuth said. “Whether Sam [Steele] gets to play a lot or not, she’s a big part of our defense with her vocals and her experience really helps. I think it just shows that we sure things up and we don’t allow them to enter our circle. We did a great job of that today.”

The four-goal victory tied Duke’s second-highest margin of victory on the season, and it was the fifth shutout in the first twelve games. The Blue Devils’ home record improved to 4-2, with three home matchups remaining in the regular season.

As the Blue Devils continue their push towards the ACC and NCAA championships, five ranked matchups in their final six contests are still on the docket. 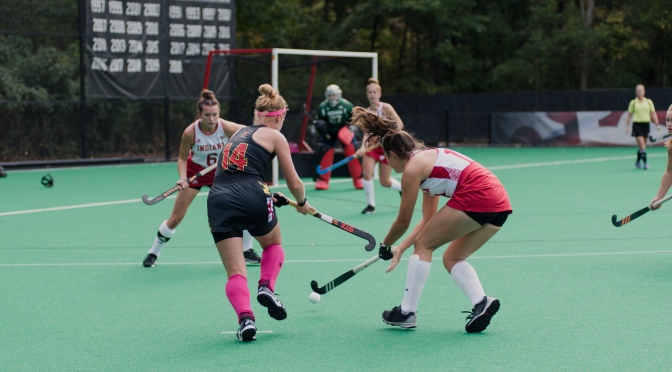 Maryland field hockey midfielder Kelee Lepage was ambling toward a growing crowd of her teammates when coach Missy Meharg wrapped her arm around the senior.

END_OF_DOCUMENT_TOKEN_TO_BE_REPLACED

CHAPEL HILL, N.C. – In a battle of the nation’s top two teams and each other’s biggest rivals, top-ranked North Carolina shut out No. 2 Duke Friday in an Atlantic Coast Conference field hockey battle at Karen Shelton Stadium. The Tar Heels stayed undefeated on the season, moving to 10-0 (3-0 ACC), while the Blue Devils fell to 8-2 (0-2).

END_OF_DOCUMENT_TOKEN_TO_BE_REPLACED 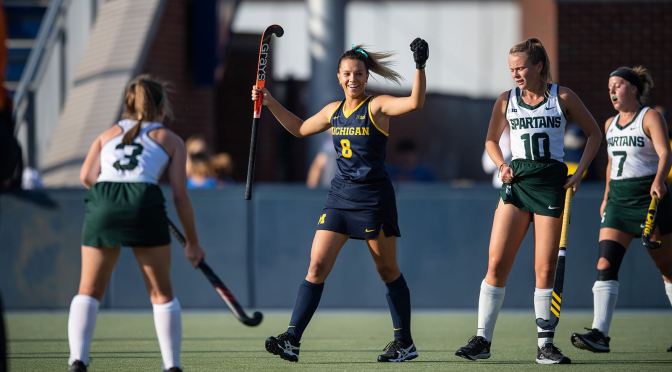 No. 9 Michigan earned its greatest goal total of the season en route to an 8-0 win against No. 24 Michigan State.

END_OF_DOCUMENT_TOKEN_TO_BE_REPLACED

The match occurred Sept. 7 between the Temple University and the University of Maine women’s field hockey teams at Kent State.